Is This the Unlikeliest Friendship in America?

She’s a gay rights activist. He’s an evangelical Christian. They tell us why “impossible” friendships can be our most valuable.

See the transcript of this conversation here.

A Therapist Teaches Us How to Connect

A crash course in reaching out to those who feel furthest away.

See the transcript of this interview here.

Why Millennials Are Moving Into Convents With Nuns

Even as young people eschew religion, some are forming unexpected bonds with sisters of faith through a shared commitment to social justice.

See the transcript of this interview here.

What Canada Can Teach America about Racial Reconciliation

Both countries have a shameful history of oppression. One of them is facing up to it.

See the transcript of this video here.

United by Activism, Separated by Decades

A young BLM activist and a veteran of the Civil Rights Movement connect across a lifetime of struggle.

See the transcript of this conversation here.

Bonus video! In this moving short film, two groups that have long struggled to connect finally let their guards down.

Young Black Lives Matter activists share many of the same social justice values as their Civil Rights Era forebears, but often there’s little interaction between the two generations. Sages and Seekers, an organization that bridges the generational divide, is changing that. In this video, we meet Ava and Mark — she a young activist, he a veteran one. They’re both still fighting, and now, they’re connecting, too.

This is the fifth and final video in “Bridging Divides,” a five-part series hosted by Scott Shigeoka, in which we talk to people whose personal experiences show us how real-life divisions can be overcome. See the transcript of this conversation here.

Watch the third video: Why Millennials Are Moving into Convents With Nuns

Watch the fourth video: What Canada Can Teach America About Racial Reconciliation

Ry Moran is the founding director of Canada’s National Center for Truth and Reconciliation, the repository for the findings of the Truth and Reconciliation Commission, which completed its work in 2015. In that position, he faces a weighty task: To guide Canada’s journey to righting a horrific wrong. For decades, Indigenous children in Canada were placed in residential schools, where their culture was systematically stripped of them in a process of forced assimilation. Now, through the TRC, the country is working to reconcile these acts. But as Moran puts it, before reconciliation must come truth. See the transcript of this video here.

Watch the third video: Why Millennials Are Moving into Convents With Nuns

Young people are eschewing organized religion at record rates. Yet, many Millennials view their struggle for social justice as its own higher calling. In this way, they’re following in the footsteps of the countless nuns who, over the years, have combined their service to God with a mission to uplift the vulnerable and marginalized. So perhaps it shouldn’t be surprising that “spiritually diverse” people in their twenties and thirties are moving into convents through a program called Nuns and Nones. In this video, we’ll meet one of them, along with the sister she connected with.

This is the third video in “Bridging Divides,” a five-part series hosted by Scott Shigeoka, in which we talk to people whose personal experiences show us how real-life divisions can be overcome. See the transcript of this interview here.

One of polarization’s more nefarious effects is how it prevents people from connecting on an individual level. Learning to push across these barriers and reach out to people you disagree with may be a dying art, but it’s also one of the most valuable methods we have for fighting alienation. In this video, psychotherapist Allison Briscoe-Smith how to do it.

This is the second video in “Bridging Divides,” a five-part series hosted by Scott Shigeoka, in which we meet people whose personal experiences show us how real-life divisions can be overcome. See the transcript of this interview here.

It’s a friendship that, to many people, might seem hard to comprehend: she’s a gay rights activist who worked to legalize same-sex marriage, and he’s an evangelical Christian who worked to prevent it. Yet Sheila Kloefkorn and Glenn Stanton found a way to reconcile these differences and form a friendship that suggests there’s no ideological divide that can’t be bridged. Earlier in We Are Not Divided, we told you the story of Braver Angels, the organization that initially brought them together. Now they tell us, in their own words, why they stay friends — and explain the inherent value in forming bonds with those you disagree with.

This is the first video in “Bridging Divides,” a five-part series for We Are Not Divided hosted by Scott Shigeoka, in which we meet people whose personal experiences show us how real-life divisions can be overcome, despite the odds. See the transcript of this conversation here.

In early 2019, I quit my job to begin a journey across the country. My goal was to have vulnerable and human conversations with people whose perspectives were different from my own. I met these people at Trump rallies and farms, in rural Appalachian towns and Midwestern cities. As a queer, Asian-American who was born in Hawaii but now lives in the San Francisco Bay Area, my hope was simple: to forge connections and bridge divides.

The trip was supposed to continue until this year’s elections, but it was cut short by the Covid-19 pandemic — yet another circumstance, it turned out, that would further divide our country. 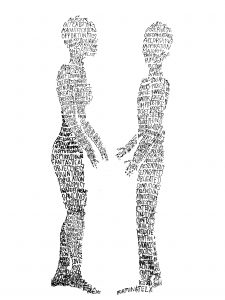 I did make it to Minnesota, however, where I met the team behind a podcast called On Being, hosted by Krista Tippett. They were engaged in a divide-bridging effort of their own called the Civil Conversations Project. We decided to collaborate on a short film that tackles a topic I care deeply about: bridging the LGBTQ+ and faith divide.

As someone who identifies as both queer and spiritual, I wanted to bring together LGBTQ+ people with people of faith (or both!) for a series of open and honest conversations.

The video shares just a few of those magical moments. The most interesting part of my work involved preparing participants, since some of them were skeptical or nervous about connecting across differences. We also had to create the conditions where all participants had shared power to both talk and listen during the conversation. Just to note: this video was filmed before the pandemic, which is why you won’t see people wearing masks or practicing social distancing.

My involvement with We Are Not Divided is a continuation of this work. Starting on Monday, I’ll be hosting a five-day video series right here called “Bridging Divides.” In it, I’ll interview people from all walks of life — an evangelical Christian and a gay rights activist, a Millenial and a Benectine nun — who are finding ways to come together, despite their different life experiences. I hope you’ll enjoy those conversations as much as I did.