A divided electorate, a gridlocked government and no end in sight. Where do we go from here? Robb Willer, a professor of sociology and psychology and the director of Stanford University’s Polarization and Social Change Lab (PASCL), has some ideas. He and his team of researchers have literally made a science of polarization, examining what it is, how it functions, why it occurs and what we can do about it. Over the course of We Are Not Divided, we’ll be talking with Willer and his colleagues about their research, taking a deep dive into the root causes and complex dynamics of division.

In the first of these conversations, Willer discusses how “moral reframing” can help us confront existential threats — and prove that we’re not as divided as we think we are.

There are a lot of social problems that are going to require some sort of federal action if they’re going to be ameliorated: climate change, economic inequality, or an effective response to the Covid-19 pandemic. It’s impossible for us to pass significant legislation at the federal level with the levels of [political] elite polarization that we have.

What are some ways to bridge those ideological chasms?

The theory that I’ve worked with the most is moral foundations theory — specifically, this persuasive technique that we call moral reframing. Moral reframing involves making an argument for a political position or candidate based in terms of moral values that you assume that they may have. We have a pretty good sense of what moral values — or moral foundations, as they call them — are endorsed more by Democrats and liberals versus conservatives and Republicans.

What are some of those moral foundations?

Liberals in the U.S. tend to endorse the moral values of care and protection from harm, as well as equality and justice, more than conservatives do, and thus are more likely to view politics through the moral lens of: we need to protect people from harm and protect vulnerable groups.

Once you have this sort of moral map, you have a roadmap or a guide to how to formulate potentially persuasive political arguments to either a liberal or conservative for a view they might not otherwise hold.

Can you give us an example? For instance, how could moral reframing be applied to an issue like climate change?

If you were trying to persuade a conservative to be more concerned about climate change, a less persuasive argument, we find in our research, would be an environmental message in terms of protection from harm. That doesn’t tend to move the needle, at least in our research.

What might be more successful would be to make an argument in terms of patriotism, about the need to protect the country, the need to help the country maintain a position of international leadership relative to other countries.

Are existential issues like climate change truly polarizing, or does it just feel that way?

By some measures, even a majority of Republicans believe in climate change and express a basic level of concern about it. And certainly a super-majority of Americans do. So you could make a case when it comes to the climate change problem, public opinion isn’t the leading issue. It’s that some very wealthy interests that don’t want to see climate change legislation happen have been able to have an outsized influence on the political process that nullifies that super-majority influence.

With moral framing you can go up to someone and say, “You can still be who you are and agree with me on this.”

Those structural mechanics are tremendously important, and ideally we would have basic structural reform around the role of money in politics, because absent that it’s hard to know how we would really combat [climate change]. But public opinion matters too, most of all because it gets people elected.

Right, and to overcome those structures that override public opinion, we will need broad, diverse coalitions. So depolarizing climate change doesn’t mean moderating on climate change mitigation, it just means creating policies that link different morals and values. How do we do that?

We’ve done research into seeing if we could construct arguments for same-sex marriage that were more persuasive to conservatives. So we constructed an equality-based argument that was along the lines of the dominant rationale for same-sex marriage, which basically said, “Gay people deserve the same rights as all other people, and that’s why you should support same-sex marriage.”

We tested that message against a very different argument that made the case in terms of patriotism and group loyalty, saying, “Gay Americans are proud, patriotic Americans who contribute to society, they contribute to the economy, they buy homes, they build families, and they deserve the same rights.” And it’s not that different from an equality message, but it’s clearly signaling that if you value group loyalty and patriotism, you should support same-sex marriage.

We found that conservatives were significantly more persuaded by the argument made in terms of patriotism and group loyalty.

What about the flip side — something traditionally conservative appealing to liberals?

One study we did made an argument for why there should be higher levels of military spending, which is a traditionally conservative position that liberals typically oppose.

We contrasted two different rationales. One was about the U.S. being a major superpower and the importance of sustaining that position in the global theater. We contrasted that with a rationale as to why the military is a force for equality and opportunity in America. 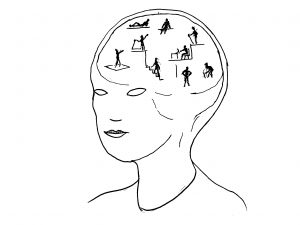 [The argument] made the case that the military is one of the few institutions in America where the poor and minorities can compete on a level playing field and can advance proportional to their talents and efforts in a way that they would otherwise struggle to because of barriers in the wider society. It was one of the first integrated government institutions, and today it plays a key role in helping the poor and minorities gain the resources needed to access higher education.

We found that, when presented with that argument, liberals were significantly more supportive of higher levels of military spending.

To play the skeptic: If I was someone who was against more military spending, hearing that would be a little scary. I might think I’m being manipulated into believing in something that I rationally think is a net negative.

While I’ve defended moral reframing as something that can be a sincere form of coalition-building in a pluralistic society — and I think it can help us bridge divides and make political progress despite our differences — I also believe that it can be a deeply cynical and strategic tool of manipulation. Just think about the purity-based arguments for the Third Reich or equality-based arguments for Stalin’s Soviet Union. Moral reframing is not new, and it’s been used for good ends and bad ends.

Why should good ideas require moral reframing? If they’re truly good, shouldn’t they succeed on their merits?

You could make a case that America is the most diverse country ideologically and demographically in the world. We’re going to have to be comfortable with agreeing to do things for different reasons because we have a lot of differences. If we’re going to hold out and say we need everybody in this coalition to not just get on board for this issue, but get on board for the same reasons as me, you’re going to be waiting a long time. It’s just not realistic.

One of the things I think is attractive about moral framing is that you can go up to someone and say, “You can still be who you are and agree with me on this.” And I don’t have to try to move the fiber of your being. Maybe they do get exposed to those [different] values over time, and they just got to it from where they already were.